Snow fence without snow
What is a snow fence?

Being a city person, I did not know what it was. The first time I saw a fence standing in a field without fencing something in, I thought ‘how stupid.

Even thinking back to summers on ocean beaches and remembering the same nonsensical fences on the sand dunes where we were forbidden to play, they didn't make sense! They seemed to serve no purpose!

The snow fence is a type of fence that- rather than contain snow (or sand), is meant to control it! It causes windblown snow/sand to accumulate downwind. It minimizes the amount of snow drifting onto roads or forms sand dunes to protect ocean front land.


How do they work?

When wind flows over objects, it causes turbulence, which slows the wind down and causes the snow/sand to fall, thus creating snow drifts or sand dunes downwind of the fence. Properly positioned, they can dramatically reduce the snow on your driveway or create barrier sand dunes to protect a beach property.

Our long driveway has a stretch of around 150 feet where the snow re-accumulated quickly after the driveway had been plowed. (The plowed berm had the same effect on blowing snow, dropping new snow back into the plowed driveway). After I was stuck there more than once and had to walk up to the house, I realized that we needed to put up a fence the next winter.

In the picture at the top of this piece, you can see how the snow drift to the right (downwind) side, has formed for about 6- 8 feet. Don't be fooled! The fence is set so far back from the road because this picture is early in the winter. The accumulating snow will continue to creep to the right. 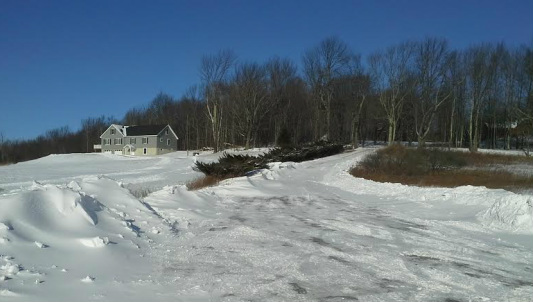 Bad natural snow fence
Where to erect a snow fence?

First, check from which direction the wind is normally coming (prevailing). We put our snow fence parallel to our driveway, about 8 to 10 yards away from the driveway and into the wind direction.  The biggest mistake people make is putting it too close (you have to give time for the snowflakes/sand to fall from suspension). You are not ‘corralling’ the snow, just influencing it. Putting it too close is the most common mistake!  Here, when the owner installed a driveway, he had the foresight to plant a row of evergreens on the windward (left) side of his new driveway. Unfortunately, he planted them directly next to the edge. Now the winter winds dump even more snow into his road, than if there was no barrier, giving him more snow to plow.

If you'd like to learn how to make a snow fence that is easy to take down and re-erect each fall, watch this web site.
We will be showing you how to do your own in a future piece.
Subscribe for free!