When I arrived in the country a few days ago, I was surprised to hear Canada geese on the pond making a lot of noise. As we use the pond for swimming we usually chase away the geese and ducks that migrate through in the spring. They find our pond very attractive, but there are many ponds nearby and a large marsh with a lot of suitable habitat. (Waterfowl droppings can contain harmful bacteria, which can contaminate a small pond, making it unsafe for swimming).  ​ 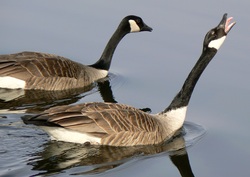 Their honking was unusually raucous and I stopped in my tracks. There were two pairs of Canada geese, swimming close together, in unison, describing tight circles in the middle of the pond, their wings cocked outward and feathers erected. At first, I thought their tight circle that they swam together was a display battle between each pair, but it seemed to me that they were acting in unison. Then I spotted the reason.

There on the bank,  I saw a bald eagle sitting, staring at the two pairs.. They were making terrible noise, swimming directly in front of him. The bald eagle just stared at them. This spectacle went on for a long time and eventually the bald eagle flew off. A little later, the geese also left looking for a safer place to raise a new family.

We had seen the eagle swooping down, catching one of our bass, but I had never seen him sitting on the ground. Was he defending his food source? Obviously, the geese did not worry him because he was just sitting there. The geese were upset and very vocal about the invader. Were they afraid he saw them as dinner?

A few weeks ago, we saw him sitting on a tree nearby, when the pond was still frozen. So he was not there for fish. We watched and waited, but he eventually just flew away. We still had a fairly deep snow cover, but we hiked down to see what had caught his interest. Then we discovered a deer carcass in the field below the pond, he had been feasting on. It was a winter killed fawn. Despite that it was covered with a smooth, featureless,  windblown crust of frozen snow, he had still found it. The spore on the surface of the snow, told the tale.

No other scavenger had found it first. The smooth crusted surface showed that no animals had sensed the carcass before him. But somehow, he had zeroed in on it from altitude. The snow was undisturbed for a dozen meters in all directions. The carcass was invisible under a flat sheet of windblown snow. He had landed within two meters of the fawn, before hopping over, digging it out  and beginning to feast. His wing tips left clear sweeps on the snow where he landed and lifted off. 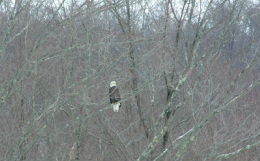 The last time we saw this was a few years ago when we had a similarly harsh winter. In the field near the road, I spied an eagle in the middle of the undisturbed snow. He lifted off when I came into view, but when I hiked over, I found the snow covered carcass and read the story written in the surface of the snow.

I read that according to 20 food habit studies of bald eagles, fish comprised 56 % of the diet, birds 28 %, mammals 14% and other prey 2 % of their diet. I suppose winter kills also help in harsh winters.