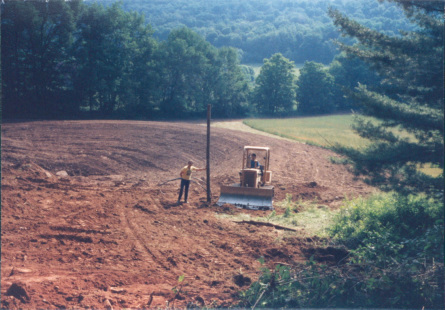 
After many weeks of fretfully watching the water level, it was only rising to a certain level. Indeed it seemed at some points to fall back again! After many weeks of anxiety, we realized that we had grazed a bed of gravel at 25 feet, where our water was disappearing.

What an expensive big hole in the ground! We were devastated! A friend had calculated the volume of water in the finished pond to be somewhere in the vicinity of one and half million gallons. There was no way we could increase the input of water to overcome the rate at which it was filtering out into the gravel streak below!

We had cut the wall of trees that screened the site from our house to have a beautiful water view. Now each day we stared out our windows at a huge, gaping, barren dirt hole in the ground. We didn’t know what to do. It was too big to try to manufacture some kind of liner. We couldn’t increase the water supply. We heard from some people that when they ran into the same problem,  trucking in thousands of yards of stone quarry dust to seal off the gravel bed would work. (It is a fine stone dust which the seeping water carries into the crevices, eventually sealing them) With no source close enough, we could not afford to truck any in. It was not an option.

We also learned that bentonite (a clay derivative) was used by some municipalities and could be bought by the bag, But again, with no local source it was too expensive. We were devastated. 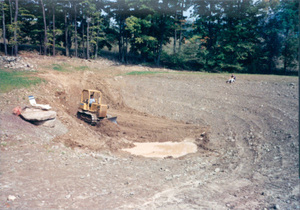 ​However, help arrived in form of a local friend who was an excavator. He had remembered hitting a bed of dense clay on a nearby farm while doing a project. He approached the owner and proposed that he could enlarge the farmer’s stock pond by trucking loads over to our pond site. A half dozen truck loads of clay to seal the layer of gravel at the very bottom was the answer! We lessened the depth to 12 feet due to the added clay, but that was okay.
​ 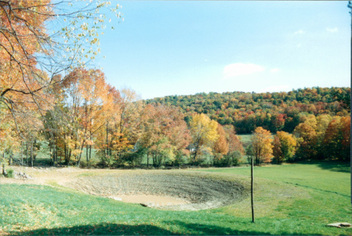 The next few months demanded a lot of patience. Then winter came and filled our hole with tons of snow.


In the spring the snow melted; there was the run-off from the hill, some of which we captured and redirected with hoses and pipes and eventually our deep hole filled with water and became a pond. It was a miracle!
Subscribe for free!