As we mentioned in an earlier blog post, we decided this year to harvest our woods. We bought our property over 30 years ago, and were young and inexperienced about managing land. The previous owner told us that the land had been logged over 20 years before, and was ready for a new ‘harvest’. When we bought the property, a neighbor showed us a photograph looking down our valley from a point above our land taken in the late 1800’s.. It showed about a mile of valley that had been clear cut from peak to peak on either side, and turned into pastures, hay fields and forage for farm animals. Trees had been clear cut for tannins to cure leathers, build cities, fuel industry and there were no stands of trees.

As economies changed, dairy, beef, corn, hay, chickens, eggs, etc. began to reshape the view from this vantage point atop the valley, into the pockets of woods and brush and mowed fields that we found when we first came into the valley.

In the last few decades, as the local economies continued to change, the brushy lots and untended pastures and hay fields have slowly turned into wood lots with beautiful trees, that we did not notice as they slowly emerged. The time had come to harvest the woods. 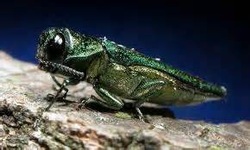 It all began with a lilac colored  box in a tree, which I noticed on my way home from buying groceries. The County put them out to see whether the Emerald Ash Borer (EAB)- an invasive species of beetle from Asia,  had arrived. The DEC (Department of Environmental Conservation) told us that the EAB is in every County around us, so the odds are, it is here already. The EAB attacks ash trees, boring into them and disrupting their water uptake, eventually killing them. As we have a large percentage of ashes, this was alarming. So we hired professional loggers to have a look at our woods. They told us that our ashes might still be okay but it was time to ‘harvest’ them before it is too late. The DEC concurred.

And so the logging adventure began! I do not exaggerate, it was quite an adventure.

Three men arrived on a Saturday morning and walked through the woods marking the trees they wanted to take. The trees had to be 18 inches (~ ½ meter) in diameter at chest height. This gave us the opportunity to check the marked trees and to decide whether there were trees among them we wanted to keep because they had a special meaning to us.

They did not only mark ashes, but also other trees, like beech, maple, cherry, and bass. We do not have a lot of pine trees. There were also a few trees marked with a red “X”. These trees had to be cut because they could fall down and destroy healthy trees. ​ 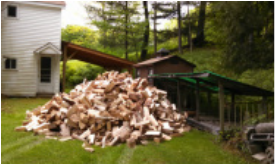 There was not a real value to those trees and they would be used for firewood. This was fine with us. Firewood is wonderful.  It is nice to burn wood in your stove in the wintertime. The heat is so different from that of the radiators. When you come in from outside, on a very cold winter day, and you can warm up in front of a fire, life is good.

For us it was important that our trees would go on ‘living’ as furniture or as homes, baseball bats, tool handles etc.  and not only for firewood. That thought appealed to us. Almost all of our renewable harvest was hardwoods, e.g.- cherry, maple, ash, etc. We were invited to follow our harvest’s journey to the mill and beyond. Hopefully we can share that journey with our followers in future posts. 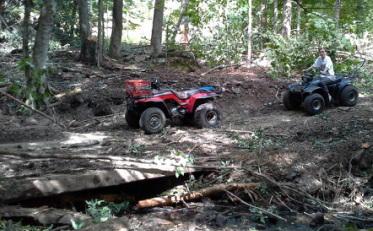 After all the trees had been marked, we walked the woods with the logging boss. Many decisions had to be made. We had to decide the routes for the logging roads that they would need to access the trees, and subsequently the placements of ‘mats’ (temporary wooden bridges) to protect our streambeds. As there is the original homestead on the property, we also wanted to make sure that historic walls, foundations, household wells etc, were not accidentally destroyed by the routing of these roads.

When the land was first homesteaded by Europeans in the first half of the 1800’s, the original homestead site was cleared for crops and livestock. The trees were turned into homes, barns, wagons, fences and tools. The stones dug to clear the soil for planting were used to create walls for pastures, foundations and bridges. Although all the original wooden structures are now just faded memories. I can still sit on the old house foundation in winter and use these old stone walls to divine the original fields and paths. Now, it has all been reclaimed by nature and is just trees and some brush.

Of course we wanted to see which trees were being taken. At one point we stopped by one of these old trees. I marveled at its size- a cherry tree over 4 feet (1.5 meters) at the base, and I said it must be worth a fine sum! 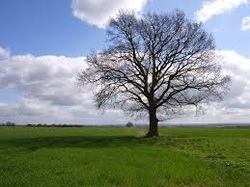 ‘No’, I was told, ‘it is a  ‘field tree’ and only good for firewood’. We were standing, surrounded by mature trees, in a woodlot marked with many other mature trees to harvest! How could he judge this to be a tree that had grown in a cleared field? It was easy, even for my untrained eye! This tree, from its broad base, turned into three massive trunks. Each of which turned into smaller trunks, from which many branches reached out in all directions. In the early life of this tree, the sun had showered it from all directions- it was in a field! By contrast, it was now hemmed in and over-shadowed by straight trunked, mature offspring and others trees, that only kept their branches reaching for the sun in the canopy far above.

I glanced at the ground. You could confirm this story in the stonewalls. As the original homesteaders cleared our land, they picked the stones from the fields and made walls to corral livestock and create hay fields. This tree stood directly next to a stone wall which 75 years ago separated two cow pastures. It had grown, bathed in light, and without competition. Now, as economies changed, and the cows no longer needed our pastures, the fields went untended and the woods have returned. This tree was now overshadowed by off-spring and competitors. It did not have the straight, branch-less trunks the market required.
This old tree however, will live on. Probably over 200 years old, it is mostly robust and has stood the test of time. Most people don’t realize that trees do communicate with each other. As disease or insect infestations move naturally into stands of trees, studies have shown that trees release biochemical signals that are received downwind by trees of the same species, which then adjust their biochemical defenses accordingly and fight off the threats. Unfortunately, new invasive species of insects- like the ash-borer EAB, overwhelm the natural selection process too quickly. Too bad for our ashes, but this cherry will continue to stand guard. 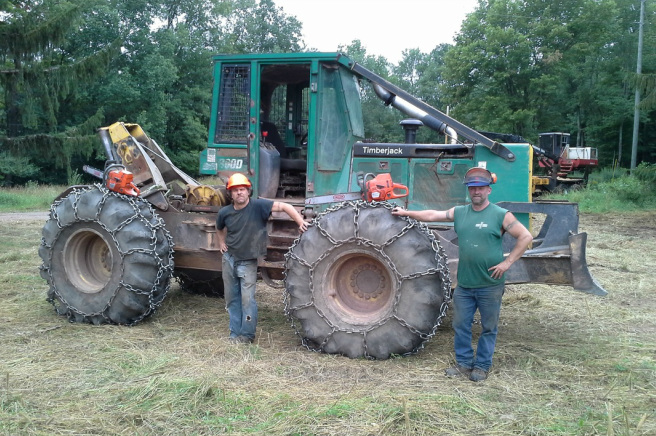 Our next installment will begin the logging process. Stay tuned!