As we related in our previous web post, the loggers have come, marked our trees to harvest and established the paths to follow in making the roads to bring out the timber.

After the loggers surveyed and mapped our property, they brought in their equipment. There were hundreds of trees to harvest. We needed to have the harvest roads not only work for them, but also for us, as we wanted to move about the land for our purposes in the years to come. There were protected streams to cross, old foundations and landmarks to preserve. We had to plan it. We walked the land with the logging boss. We showed him the areas we wanted to protect and the new roads we wanted. He showed us what they could actually do, and we settled on the best paths. In the end, we made new roads that preserved the old paths and walls, but gave us new mobility. 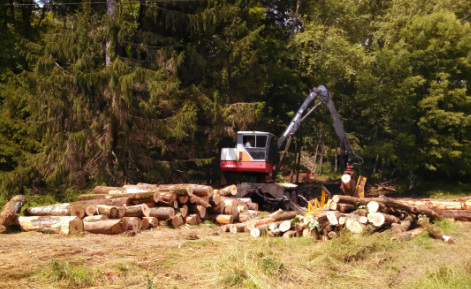 If you are going to do this, you have to ‘land’ your logs in an area that is NOT interfering with a public road! The equipment needed can weigh tens of thousands of pounds. The chain covered six foot tall wheels of the skidders and the steel tracks of the bulldozers will make quick work of the nice smooth surfaces of an asphalt road!  Besides, logging is one of the most dangerous jobs around. When you combine massive heavy equipment, huge logging trucks, and cranes swinging tree trunks weighing thousands of pounds through the air, things can get dangerous very quickly.  You’ll need to find an area free of overhead power lines and stray traffic, but accessible to the long tractor trailers that will haul the trees to the mill.

You’ll also need enough space to bring logs down (land them). in an area where they can be ‘bucked up’ (cut into pieces) and loaded for the sawmill. Here the logs will be staged for processing. They’ll need plenty of room to maneuver as the skidders haul 50- 60 foot (15-20m) long trees from the woods, buck them up, stack them and still have room as the tractor trailer trucks arrive to take them away. 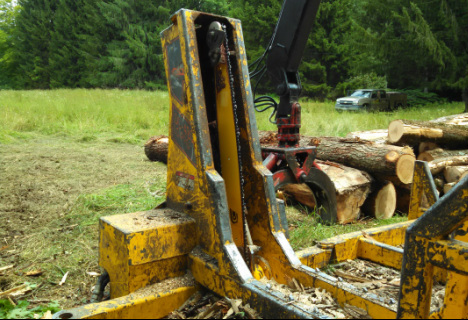 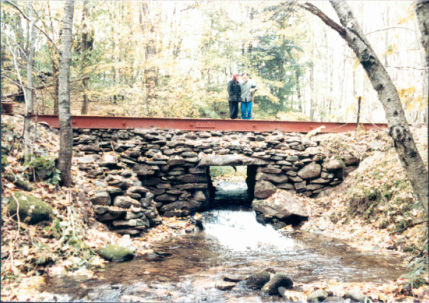 Private bridges and culverts must support the loads
In our case, the whole operation would be crossing several protected streams, so we had to make sure that our bridge could handle the 50- 60 ton loads and that the smaller stream beds would be ‘matted’ to protect the native trout.

After all the planning and preparations were completed, millions of dollars worth of heavy equipment began to arrive! We pride ourselves in trying to do things on our own, but the scale of the operation made us feel very small! Clearly a harvest like this required professionals.

Each morning between 6:30- 7:00 am, the crew would arrive and move into the woods with their chainsaws. The air was filled with sounds of growling saws, splintering branches and the deep, ground shaking thuds of immense trees hitting the earth. Soon this was joined by the rumbling diesels of the skid steers and dozers as they pulled the logs from the woods to our principal landing. After several days, the roars and crashing slowly retreated up the mountain, as the operation worked its way across the property, until it was lost to our ears. 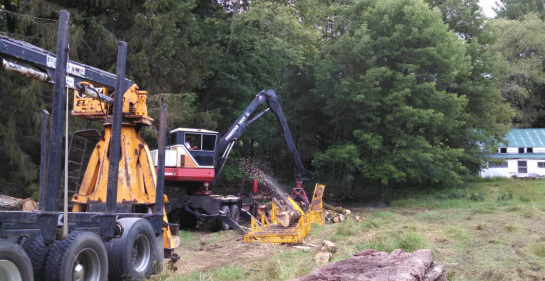 Wood chips fly as the Proceesor bucks a tree
Their wood processor would grumble to life whenever a trailer truck’s load had been stacked on the landing. This enormous machine had a crane which would pick up each tree trunk and drop it into large steel cradle with a built-in five foot long chainsaw, which then would buck each tree into 8- 10 foot lengths for the saw mill. The crane would then stack these to the side for the log trucks.

As the logging trucks arrived, each had a crane which the operator would use to load the beds from the stack provided by the processor. At times, we would have two logging trucks being loaded, the processor swinging and bucking logs, and skidders arriving on the landing dragging 2 or 3 sixty foot long trees at a time. It was quite a spectacle of teamwork, heavy machinery in action and danger! With all the noise and commotion, it was easy to understand why logging is such a dangerous occupation.

Each day, the crew would return from the woods around 4 pm. They would inspect, repair, refuel and lubricate the machines and leave everything in shape to start anew the next morning. After they left, we would take our ATVs and inspect their day’s progress and see if we wanted them to change directions or use the heavy equipment to do something we couldn’t do ourselves. They were always helpful and willing to discuss why they were doing things a certain way. We resisted the temptation to go watch them work in the woods. They didn’t need to be distracted when felling trees, which could reach out for a hundred feet in any direction with breaking branches and toppling ‘casualty’ trees. They call them ‘widow makers’ for a reason. The job is hazardous enough without adding curious owners to the mix.


In just over two weeks, the job would be done. In the next installment, we’ll speak about finishing the harvest. 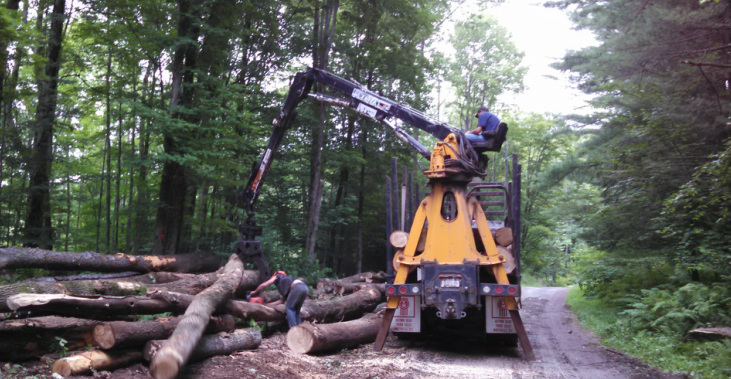 A second landing was needed for one section
Subscribe for free!