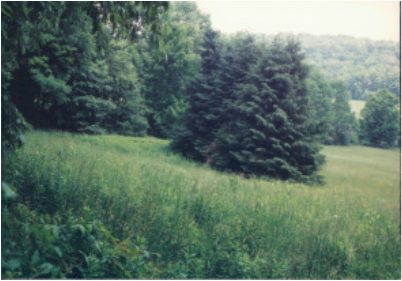 Before we put the pond in.
Building a pond


We had everything in our paradise: an old house with lots of character, a long driveway for privacy, a vegetable garden, woods, fields and all the wild animals. Nevertheless, something was missing, at least for me. I like to swim, especially when it is hot and humid and I have to cool down.

So we began thinking about building a pond. There was room enough to do so, but we had to pick the right spot. We decided we could build about a one acre pond in the bowl shaped hay field below our house. However, the right spot might not provide the right soil. So we had soil tests done and unfortunately learned, that our dream spot could not hold water on a subterranean gravel foundation. So we dug some more test pits.

We settled on land behind the house, tucked up into the slope of the hill on the upper reaches of the hayfield. It was hidden from the view of the house behind a wall of trees, effectively  it did not exist to us on a daily basis. 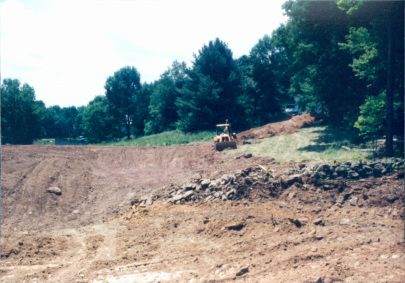 The contractor at work
We interviewed several contractors and eventually hired one. At the end of June, he arrived with his crew, huge excavators, bulldozers and lots of other machinery I had never seen before.

A grove of pine trees- that had been inexplicably planted in the middle of the hay by a previous owner, was cut down and burned, soil moved, soil graded, and a dam built. The whole spectacle lasted a week.

Our first choice- in the natural bowl of the field was chosen partly because the natural run off of snow and rain from the hill, would help keep the water fresh and the pond fully charged. Having to tuck the pond up into the hill would reduce this natural run off and was a concern. Fortunately for us, our farm is supplied with water from a natural spring on the other side of the hill, which feeds our buildings through a 1000 foot long pipe.

It is enough water to have supplied two farms reliably for over the last 100 years.  So we cut the pipe and took the opportunity to install a nexus of control valves, so we could control the water flow to each of three farm buildings, our house, a new pipe to our pond site and a master control valve for the whole property. The weight of that column of water stacked up in the pipe from the spring uphill, gives us naturally over 30 pounds of pressure at the house.

Fortunately, an agent with the agricultural extension- who had helped with the site selection, had also checked the output of our spring and assured us that it was more than sufficient to keep the pond charged. If the pond was reasonably tight, he told us that the equivalent flow of an open garden hose, would be more than enough. Our excitement was growing with every passing day! 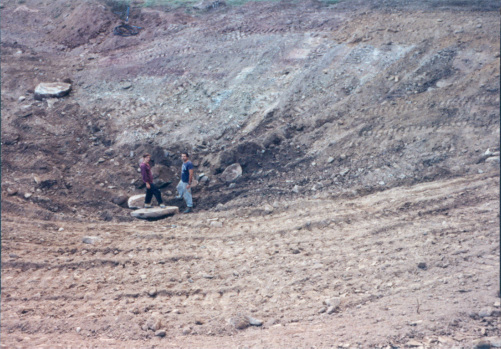 A big empty hole.
As the pond took shape, a lot of design considerations began to arise. How were we intending to use it? Were we going to stock it with fish? How would we handle excess run off to avoid dam erosion? Many things had to be decided as we built the site.

Now that it was tucked into the hill the pond would be more elongated and about a quarter acre in surface area. We had dreams of raising trout (which are native to our streams, but small because the streams are small). Trout need very cold water., so we made it 25 feet deep. We hoped that the very cold spring water that we were piping in, combined with the depth, would keep the solar heat gain down to a trout sustainable level in the summertime. 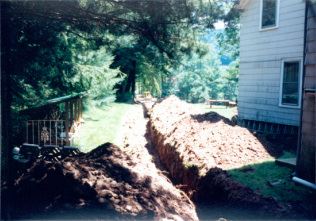 Trench for pond water supply
We dug a trench below frost level from our new nest of control valves, 400 feet to the pond site and connected black plastic pipe. To handle the over flow, we made the run off (spillway) on natural ground level, into a swale (a long shallow furrow in the ground) we created that ran about 500 feet along the stone field wall all the way out to another stream. The swale is very shallow so our crop of hay and the shallow incline prevents erosion.

At one end of the pond, we created a shallow beach area, ranging to a depth of 4 feet, before dropping off suddenly to 25 feet. To service this beach area, we built a staircase, so my elderly mother could get in and out easily to bob around and cool off, and children who couldn’t swim yet could play 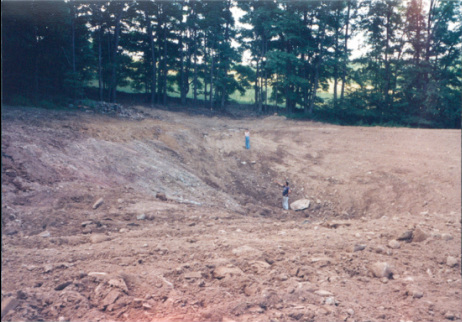 My mother inspects with the builder
On the up hill edge of the future water level, above the deepest part of our future pond, we positioned two massive boulders on top of each other, so the top one would be just a few inches above the water. (I used to love to dive competitively in school and thought we could use them as a foundation to install a diving board. If not, it would be a cool spot to sit and dangle our feet in the water, or fly fish from.

We took another large boulder excavated from the site and placed it at the edge of what would become a flat lawn by the beach area, where we could sit on a bench and enjoy the view. 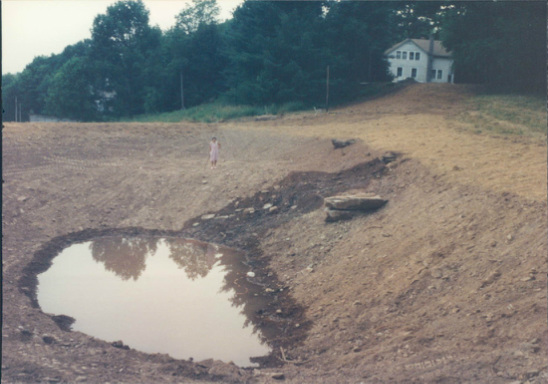 My mother standing on beach area bottom
When the pond builder left, we had an enormous hole in the ground and a little bit of water was trickling in. Every night we went to the top of the dam and looked down, wondering whether the small amount of water we were trickling in, combined with the summer rains would ever fill the gaping hole in time to enjoy that summer.
Subscribe for free!